Christmas in Cornwall is just around the corner…

But after last Christmas revealed a shocking family secret, Scarlett’s hardly feeling merry and bright. All she wants this Christmas is to know who her real father is.

So Scarlett heads to the little Cornish town of Porthmellow, where she believes the truth of her birth is hidden. She just didn’t bargain on being drawn into the Christmas festival preparations – or meeting Jude Penberth, whose charm threatens to complicate life further.

Everything will come to a head at Porthmellow’s Christmas Festival … But can Scarlett have the perfect Christmas this year, or are there more surprises on the way?

Who doesn’t like a festive read at this time of the year, here we see Scarlett getting drawn into Christmas festivities in Portmellow. It sounds such a lovely place to visit and meet some of the charming characters that live there. This is the second book in the series and i am really looking forward to the third book. This one felt as though I was coming home.

Two victims. Brutally murdered in their own home. Body parts taken.D.I. Graves is back on the case to face his toughest challenge yet. A case with no motive and no suspect, nothing at all that could explain why someone would kill innocent people in such a way. Then the next victims are discovered.

Another pair of bodies. New body parts taken. Again in their own home. Someone is breaking into houses across the city at night, leaving horror in their wake. It seems to Graves that this could be two serial killers, working together. But how are they choosing their victims? Is any house in London a target? Is anyone safe?

To make matters worse, a journalist is threatening to cause more harm than good with her obsessive push in covering the story to further her career, and someone is targeting Graves personally, seeking revenge against him in relation to an old case.Can Graves keep himself safe long enough to stop the serial killers before they strike again?

If your after a creepy, tense and gruesome read this is the one for you. Can D.I Graves work out who the murder is? This is edge of the seat stuff wanting to work out before the D.I who the murder was and why he/she did what they did to the victims. A tense read with a dramatic ending. This is book two in the D.I Graves series.

Twenty-nine-year-old Blair Walker is a girl with a plan, or more a girl with a list. A list of dos and don’ts to live the perfect life, land a dream career, and marry Mr. Right.

But when Blair loses her job and gets dumped by her boyfriend all in one day, she starts to wonder if she’s had it all wrong. And what better way to find out than experience everything the list forbade?

With hilarious consequences, Blair will discover some items are trickier to tick off than she’d thought…

After reading the first book in this series I couldn’t wait to read this one. I enjoyed this one even more as there are more laughs along the way. This book can be read as a standalone but I honestly can say you will want to read them all. I found the story line very imaginative and exciting. It definitely cheered me up. 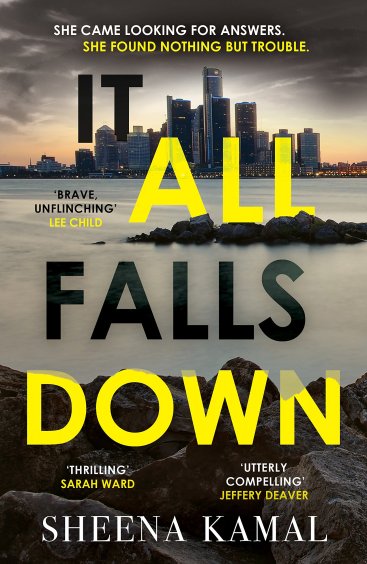 When Nora Watts is approached by a man claiming to know her late father, she is thrown into turmoil. Struggling with the imminent death, from cancer, of her friend and mentor Sebastian Crow, she is unprepared for the memories that this encounter brings back. What happened to her father that made him kill himself and abandon Nora and her sister?

Heading to Detroit to try and find some answers about his life there, Nora expects to discover a reason behind his suicide. Instead, she finds more questions than answers.

But trouble always follows Nora, and it’s found her in Detroit, a city that is as broken as she is.

We don’t always get what we want. Luna Blake wants a fresh start. Moving in with her uncle will give her that. She also wants to earn a living from her photographs and paintings of the moon. What she doesn’t want is to fall in love because the last time she did that, it broke her heart in two.

Severine Starr wants to spend as little time as possible visiting her family. She wants to get back to her new man and her new life in New York. She simply needs to persuade her teenage daughter, Raven to go with her. But things at home are far from how she left them. Logan Dorset always wanted to open his own restaurant – and now he is. He also wants a woman he can’t have.

A woman he’s been in love with all his life. A woman who’s in love with someone else. He just wants a chance to tell her how he feels. Roggero Tazzeone disappeared from Michaelmas Bay more than fifteen years ago. Now he’s back and he’s trying to make up for his past mistakes. After all this time, he knows exactly what he wants.

But strange things can happen in the moonlight, and what each of them wants may not be as straightforward as they think.

I have read all of Emily’s books and they never fail to cheer me up. This book follows on from book one which is called Christmas secrets in Snowflake cove, we follow some of the old characters and we also get to meet new characters along the way too. The story is well written as are all of Emily’s stories and descriptive which makes you feel as though you are there. It makes you want to read the book in a day which I did.