Forget about having it all. Sometimes you just want to leave it all behind.

Audrey is often seized by the urge to walk out of her house without looking back – but she can’t possibly do that.

She is a single parent. She is needed. She has a job, a home, responsibilities…and a slothful teenage son’s pants to pick up.

But no one likes being taken for granted – Audrey least of all – so the time has come for drastic action. And no one’s going to stand in her way…

I was given this book for an honest review. I really enjoy books by Fiona Gibson as they always manage to put a smile on my face. This one was really good, I particularly enjoyed the recipes at the back of the book, as I was asked to make one of the dishes and put pictures up on my blog which I have done in my previous post. There are some very funny laugh out loud moments so be careful where you are reading this book as I was getting strange looks. If you want a nice light easy read this is the book for you.

For more Fiona Gibson books, please click on the link below:

I am so excited about the upcoming release of Fiona Gibson’s new book called The Woman Who Upped And Left which is released in paperback on the 25th February.

At the back of this book there are some recipes and I was asked by Fiona’s publishers if I would like to be sent a recipe and then make it but also take pictures along the way.

I was chosen to make Leeks Vinaigrette, now I halved the recipe as I can’t unfortunately eat leeks so I made it for my fiancée.

Here is the recipe: 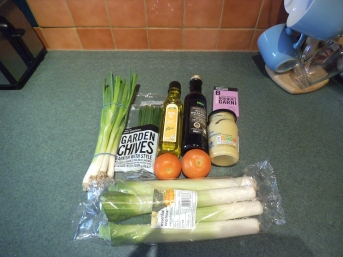 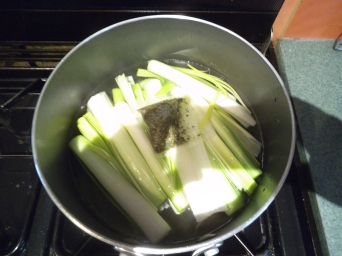 2.Chop each leek into three of 4 pieces, drop into a pan of boiling water with the bouquet garni. Simmer for 20 minutes until tender. Remove leeks with a slotted spoon and set aside. 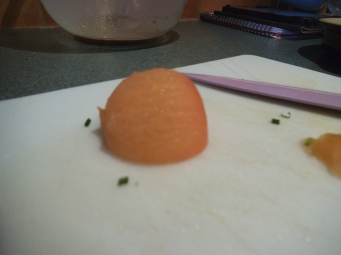 3. Using the same water, drop in the tomatoes for a few seconds, then lift out, allowing the tomatoes to cool for a few minutes, then you should be able to strip off their skins quite easily. ( I found this part quite satisfying). Keep pan of water bubbling away until it has reduced by a third. 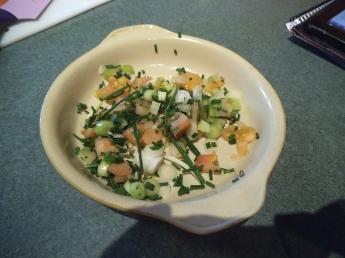 4. Chop the tomatoes into small pieces and combine with the chopped spring onion and chives. As you can see my chopping skills are not the best, But I tried.

5. To make the vinaigrette, combine the olive oil, balsamic vinegar and mustard with 3 tablespoons of the reduced leek stock from the pan. You need to mix it till it forms a smooth emulsion, season with salt and pepper.

6. Add in the tomato , chives and spring onion mixture and mix them all together. I know it doesn’t look very appetising but it does smell great.

7. Place leeks in a shallow dish. ( I used a rather large one which was a bit of a mistake) Dress with the tomato vinaigrette and sprinkle black pepper on top.

I found this recipe fairly easy to make, the recipe was quite straight forward, I would make it again but I would chop up some of the ingredients smaller and I would use a smaller dish. My fiancée loved it.  He has asked me to make some of the other recipes from the back of the book, so looking forward to that.

My review of this book will appear very soon. So keep your eyes peeled for it. 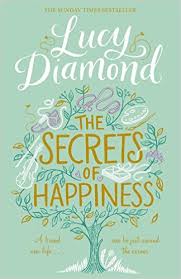 The best things in life . . . can be just around the corner

Rachel and Becca aren’t real sisters, or so they say. They are stepsisters, living far apart, with little in common. Rachel is the successful one: happily married with three children and a big house, plus an impressive career. Artistic Becca, meanwhile, lurches from one dead-end job to another, shares a titchy flat, and has given up on love.

The two of them have lost touch, but when Rachel doesn’t come home one night, Becca is called in to help.
Once there, she quickly realizes that her stepsister’s life is not so perfect after all: Rachel’s handsome husband
has moved out, her children are rebelling, and her glamorous career has taken a nosedive. Worst of all,
nobody seems to have a clue where she might be.

As Becca begins to untangle Rachel’s secrets, she is forced to confront some uncomfortable truths about
her own life, and the future seems uncertain.

But sometimes happiness can be found in the most unexpected places . .

I decided to treat myself to this book as I am a big fan of Lucy Diamond’s books and I wanted to add it to my collection of her books. Being hardback it is quite a heavy book but that did not stop me, I managed to read it three days. I love the way Lucy writes, there are personal issues in the book but Lucy has dealt with them very sensitively. Any Lucy Diamond book always puts a smile on my face and this one did too. All the characters are fantastic, I loved reading about the children especially Luke as he seems like a cheeky one. If you want a feel good book this year, I would recommend this one.

For more Lucy Diamond books, please click on the link below: 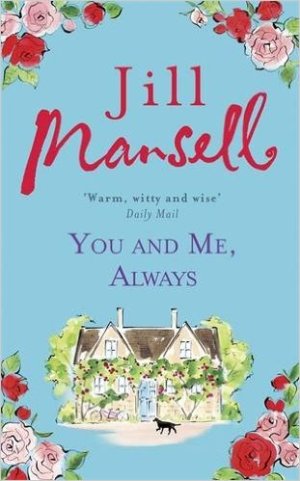 On the morning of Lily’s twenty-fifth birthday, it’s time to open the very last letter written to her by her beloved mother, who died when she was eight.

Learning more about the first and only real love of her mum’s life is a revelation. On the same day, Lily also meets Eddie Tessler, a man fleeing fame who just might have the ability to change her world in unimaginable ways. But her childhood friend Dan has his own reasons for not wanting Lily to get too carried away by Eddie’s attentions.

Before long, secrets begin to emerge and Lily’s friends and family become involved. In the beautiful Cotswold village of Stanton Langley, nothing will ever be the same again…

I was lucky enough to be given this book by Jill Mansell’s publishers. I am very grateful that she sent it to me as I love Jill’s books so much. This one was brilliant, I literally couldn’t fault it. I loved the story, it made me feel as though I was actually there, I loved all the characters I mean I felt as though they were my friends.Such a beautiful story, Jill Mansell’s books just keep getting better and better.

A tragic accident. It all happened so quickly. She couldn’t have prevented it. Could she?

In a split second, Jenna Gray’s world descends into a nightmare. Her only hope of moving on is to walk away from everything she knows to start afresh. Desperate to escape, Jenna moves to a remote cottage on the Welsh coast, but she is haunted by her fears, her grief and her memories of a cruel November night that changed her life forever.

Slowly, Jenna begins to glimpse the potential for happiness in her future. But her past is about to catch up with her, and the consequences will be devastating . . .

I bought this book as I had heard quite a few good reviews on it. I didn’t enjoy it as much as I thought I might. I think it is a book best read when you have time to sit down and concentrate maybe take it on holiday. I liked the plot and there are twists and turns but I kind of had worked out a few of them along the way. As this is Clare’s debut novel, I would still be interested in reading her next book. 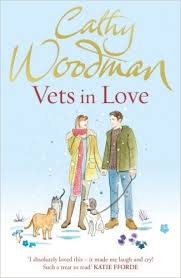 Love is in the air in Talyton St George, Devon’s most romantic town.

Glamorous GP Nicci (aka the galloping doctor) and Matt, the very handsome equine vet, have caught each other’s eye. On paper it looks like a match made in heaven.

There are problems, however: Matt’s jealous ex-girlfriend being one of them. But the main trouble is Nicci’s determination to qualify for the Badminton Horse Trials. Because although Matt treats horses for a living, a tragedy in his past makes him terrified every time Nicci competes.

So when Nicci has a terrible accident, a devastated Matt gives her an ultimatum: it’s him or the riding.

Nicci can’t believe he means it. But can she risk putting him to the test?

Each book in the Talyton St George series can be read as a standalone novel, but I would certainly recommend reading them all in order as you will get to know the characters and their stories. This is the sixth book and I really enjoyed it. I am a big fan of Cathy Woodman’s books, she has a lovely style of writing that is like being wrapped in a big warm hug. I loved the story and I did really feel for Nicci at times. I enjoyed reading about the horses side of the book as I used to ride and this has made me really want to get back into it. A lovely little story that you will want to read over and over again.

These are the other books in the series: 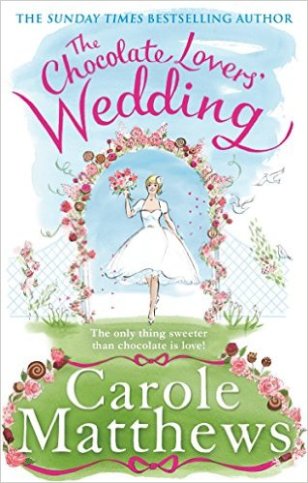 The ladies of The Chocolate Lovers’ Club should be gearing up for the wedding of the year but life keeps getting in the way . . .

Lucy is worried about her financial situation and it keeps distracting her. Should she accept an offer of help from an untrustworthy source?

Nadia may have a real chance at finding love but other areas of her life aren’t so rosy. Something needs to change – but what?

Autumn can’t wait to meet someone she hasn’t seen in a very long time. She’s full of hope for the future but then things don’t exactly go to plan . . .

Chantal has been through so much and she’s finally starting to feel settled. The last thing she needs is the kind of bad news that could change her life all over again.

And yet, despite all the ups and downs, the Chocolate Lovers’ ladies know they can get through it all as long as they have each other. They’re not going to let anything get in the way of their happy-ever-afters in . . . The Chocolate Lovers’ Wedding.

I was given this book by a fellow book friend of mine and I couldn’t wait to start it, I am a big fan of Carole Matthews books and I have all of her books. This is book 4 and I would recommend reading all of the other ones before this, so you can get to know all the women. Reading this book made me feel like a warm hug, I feel like I know all the ladies personally now and I would love to have friends that are truly great like that. Such a brilliantly written book, I wonder if there will be a book 5, I do hope so.

If you would like to have a look at Carole Matthews website and see what her other books are called in the series, please click on the link below:

Echoes In An Empty Room
Blog at WordPress.com.